Start a Wiki
Ahriman is a strange plant/animal entity and an antithesis to Uilliane. While Uilliane was born from a rare tree bearing magical white fruit in Khautagozd, Ahriman was born from the warped plants in the deeper circles of the forest. He's not exactly evil, as in, he doesn't really want to hurt anyone, but he tends to do so anyway because his perception of reality is highly skewed by being born in the most corrupted circles of Khautagozd. He is confused and frightened by the rest of the world around him, and lashes out in fear. He's like a small dog given human form- really energetic and loopy but effectively harmless as long as he is unprovoked.

He is currently living in the deeper areas of Khautagozd, occasionally coming out to try and socialize with the more normal people in the outer ring (and antagonize Uilliane). He once attacked the Bladewood Grove and briefly earned Okimiyage's scorn because of this, but the two have since made up.

Ahriman's skin is dull purple-black and has a very odd, smooth texture, comparable to that of a plant leaf. It's flecked with cyan spots and gets more gnarled towards the tips of his limbs, feeling more like tree bark on his hands and feet. His hair is dark teal and loosely pushed back. He has a thick tail coated in thorns, which lay flat against his skin normally- he can stand them up on end and even shoot them. From his back, two long vines sprout, tipped with jagged-mouthed chomper plants. When Ahriman is not weaponizing them, they are slightly ambulatory on their own, bending and curling in the air behind him.

He wears a somewhat torn up purple top and very slightly tattered dark purple pants, as well as a loose magenta belt with a cyan flower on its side and a blue bow. A lot of his current clothes were given to him by Uilliane, because she thought he'd look cute in them. His eyes are solid cyan. 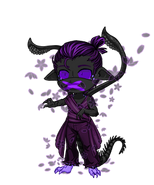 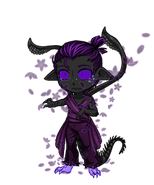 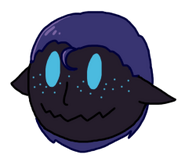 Add a photo to this gallery
Retrieved from "https://silvieskydancer.fandom.com/wiki/Ahriman?oldid=3833"
Community content is available under CC-BY-SA unless otherwise noted.