Z-4500, almost always referred to as their codename Akemi, is a cynical, irritable android with powerful AI. Originally programmed as a guard for a high-tech Lower Earth vault, she has gathered information about her purpose and decided to strike out on her own. She is one of the founders of Titanim. While she typically appears clearly robotic, she has a holographic human disguise for when she decides to head out in public- not that it disguises her very well; her voice is very clearly robotic.

She was one of the later robots to be made with a Chaos Core, an energy generator using a dark magic-infused crystal as its central power source. While these are very unstable and frequently lead to robots being destroyed by uncontrolled dark magic, Akemi's Chaos Core is built rigidly with large amounts of magical stabilizers within it. She is constantly afraid of the core destabilizing, but has learned not to make it obvious and generally hides it around other people.

Akemi has a metallic, jointed base molded to look human. Over this she has synthetic black hair and pink antennae, with a simple black outfit coated with pink circuit markings. She also wears a visor, gradienting from violet to gold.

Her human disguise has a simple black-and-pink outfit, consisting of a shirt, jacket, and skirt.

Human!Akemi. (This was technically their first concept, and was recycled for use as her human disguise.) 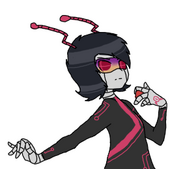 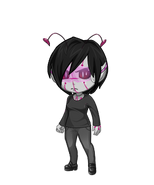 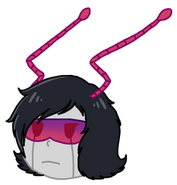 Add a photo to this gallery
Retrieved from "https://silvieskydancer.fandom.com/wiki/Akemi?oldid=4123"
Community content is available under CC-BY-SA unless otherwise noted.