Akyri is the First God of ice, and one of the most approachable First Gods there are. He's among the most casual gods in general and is a snarker to the extreme, often playfully mocking the other First Gods, but this tends to seem condescending to the New Gods- which is why he rarely talks to them. His humor's pretty dry and usually involves jokes about his status, bad winter puns, or jokes at the expense of Oblivion. He's usually followed by snowfall and temperature drops wherever he goes, but this never lasts long- the weather is back to normal a few minutes after he's passed by.

Akyri sealed himself away in a crystal of clear quartz for millennia when the Diamas Harmonia was destroyed, and was freed when Cobra found him. He now lies somewhere between Nithya and the New Gods in importance, and considers Cobra a close friend of his- which means poor Cobra gets quite a lot of teasing.

Akyri has pale blue, slightly shiny skin, and wears two layered jackets, one light blue and one black, over a yellow shirt patterned with a snow leopard face, and slightly tattered blue pants. He also wears a dark scarf around, that he treasures and doesn't let anyone touch. His hair is light, icy blue- almost white- and he has snow leopard ears and a tail, representing his patron animal. He tends to carry a popsicle around as a joke. 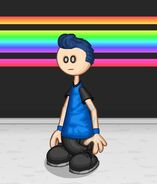 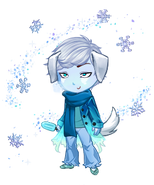 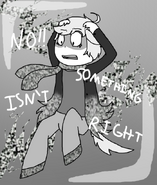 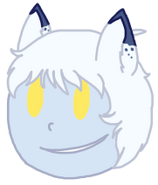 Add a photo to this gallery
Retrieved from "https://silvieskydancer.fandom.com/wiki/Akyri?oldid=3841"
Community content is available under CC-BY-SA unless otherwise noted.