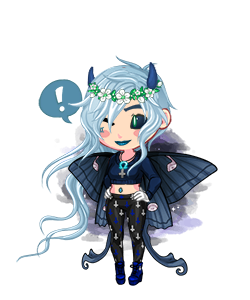 Amisi is a member of a fairy race from Paijinko, whose powers are slightly determined by their colors. Spunky and friendly, but somewhat standoffish, Amisi is the kind of person who you're pretty much automatically friends with unless you piss her off. She is capable of telekenisis and hydrokinesis, owing to her blue colors.

She's very protective and caring towards her sister, Aislinn, and will do anything to protect her- or avenge her, should she ever die. The omega necklaces they wear are effectively their "friendship bracelet" equivalent; they gave the necklaces to each other and have worn them ever since.

Amisi wears a short blue sweater with white gloves, exposing her midriff; she has a belly jewel. She also wears cross-patterned black leggings and blue boots, a flower crown, and a blue omega necklace. Her hair is very long and light blue, and she has short, nubby blue horns. Her dark blue luna-moth-like wings are a common trait in her race.

[No other images as of now]

Retrieved from "https://silvieskydancer.fandom.com/wiki/Amisi?oldid=1875"
Community content is available under CC-BY-SA unless otherwise noted.