Ariel is a pig-centaur residing in the Oria human colony. Originally a normal human, she was born in the Ghirian lowlands' human village and was friendly, but a bit of a glutton and rather inconsiderate when it came to her food. She was one of several people who was on the original trip to the Oria human colony, which malfunctioned and crashed on the uninhabitable planet's surface, killing everyone inside. After spending a year in the Afterlife, Ariel found a portal back to the main universe, but before she got to reincarnate, she was judged to determine what her reincarnated form would be. Her inconsiderate gluttony gave her the body of a pig before she was reincarnated- but she has completely accepted this. She likes pigs, anyway!

Ariel has two-toned, straight blonde hair, and wears a brown-and-red frilly shirt, dancer ribbons, and a red sailor hat. Her legs are replaced with the body of a pig, and she has pink spots across her human half. She also has four magic wings, one pair on her human back and one on her pig back- she is able to materialize these at will. They are small and she isn't capable of true flight, but is capable of boosting her jump height using them. 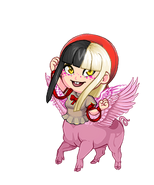 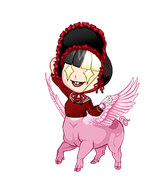 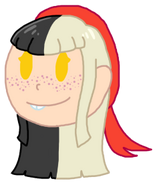 Add a photo to this gallery
Retrieved from "https://silvieskydancer.fandom.com/wiki/Ariel?oldid=4067"
Community content is available under CC-BY-SA unless otherwise noted.