Start a Wiki
Beta is one of the five souls that were contained in the Experiment. Within the machine he was rather mellow, but often tried to crack jokes about the situation. Keyword, tried, since the others usually spoke over him. He'd often complain about not being able to find his glasses, despite no longer needing them. His typing style would change on a dime, but most commonly he would type in all lowercase with full punctuation, sometimes lapsing into all-caps. As a human he's effectively the same, a laid-back jokester who has a bad tendency to lose things in obvious places. He's the kind of person who would lose his glasses on the top of his head.

He spends most of his time playing video games and recording himself doing it, for fun more than anything. His favorite recording partner is Gamma, since he thinks Gamma's very shy nature is easy to play off of. Also because Gamma versus horror games is pure hilarity.

In the final moments of their physical life in the Experiment, he killed Delta, and was killed by Alpha.

Beta has fluffy blue hair with a distinct cowlick, and bright blue eyes with subtle green and reddish-brown highlights. He wears a red and white hoodie, a blue belt, and green sweatpants, with a mint green shirt under his hoodie. His shoes are red and white with a green stripe on the side.

His soul in the Experiment was blue. 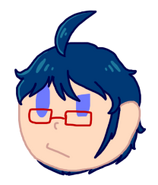 Add a photo to this gallery
Retrieved from "https://silvieskydancer.fandom.com/wiki/Beta?oldid=4012"
Community content is available under CC-BY-SA unless otherwise noted.