Start a Wiki
Dionisia is an ancient water spirit from times long past, who was frozen away in Abylos's first (and so far only) ice age. After being freed in the big melt, she has since explored the aquatic world and discovered Byloth and its subcities. She settled down in Lapitos, and found herself fascinated with the culture and city life. She assembled a new wardrobe and found herself socializing and generally getting along quite well with the city's population. She is friendly and talkative, with deep curiosity about the world around her similar to that of a young child.

Even then, she still shows hints of her old self- especially when Lapitos is threatened by something, be it from the outside or the inside. As a water spirit, a species that is naturally connected with the astral plane, she is capable of forming a mental link with ne'er-do-wells to determine their next move down to the letter, making even the most erratic foes perfectly predictable- and making Dionisia herself nearly unbeatable.

She eventually moved to Byloth after tagging along with the other protagonists.

Dionisia wears a fancily-patterned blue shirt and a black-and-blue ruffled skirt, with a blue shawl patterned with the Pisces symbol. She also wears a floating blue sash, which is a holdover from her original wardrobe. She never got rid of it because of sentimental value. Her skin is a dark blue-green with bioluminescent seafoam speckles on her face and limbs, and her hair is dull blue-green and always seems to flow as though it's in water. Her eyes are black with bright, glowing cyan pupils. 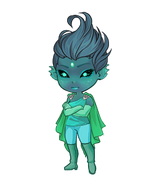 First concept
Add a photo to this gallery
Retrieved from "https://silvieskydancer.fandom.com/wiki/Dionisia?oldid=3570"
Community content is available under CC-BY-SA unless otherwise noted.