Elva-Russa is a teenage girl living in a human village in Neo Skylands, brought up from Lower Earth in Gaia's hatching. She has never lived a normal life; her parents were murdered before her eyes before her age even left the single digits. Exactly five years later, the murderer arrived in her home while she was asleep and attacked her, wishing to finish the job- but only managed to mutilate her right arm. The arm's tendons were sliced and it no longer functioned, so she had to have it amputated. She felt oddly uncomfortable wearing a prosthetic arm, so that was later removed. She has never been quite the same since her disquieting childhood; she always dodges the subject when it comes up in conversation and has deep-rooted mental health issues, with highly prevalent anxiety above all else. She is heavily withdrawn and avoids people, and seems to cling heavily to her tortoiseshell cat, Twilight, treating her like her best friend.

She never got a good look at what the murderer looked like and has since buried the memory, but always describes him as wearing a long, blue and teal jacket...

Elva-Russa's most notable feature is her right arm, which was amputated just below the shoulder. She wears a dark blue cardigan over a light-and-dark blue striped shirt, a size or two too big for her. She also wears a pleated, very dark blue skirt over black leggings and blue shoes. Her hair is light orange-brown and slightly wavy. She also wears a light blue heart necklace, which she claims used to belong to her mother. She protects it viciously.

Twilight is usually tagging along shortly behind her, and sometimes rests around her shoulders. 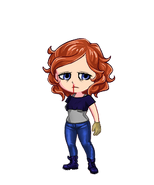 Collab Art made by Silvie, Almei, Lpcarver and Rasd
Add a photo to this gallery
Retrieved from "https://silvieskydancer.fandom.com/wiki/Elva-Russa?oldid=3992"
Community content is available under CC-BY-SA unless otherwise noted.