Start a Wiki
Enide was a ragdoll born through unknown means. She was a very, very creepy person, acting with no thought on her part with a powerful dark magic, and didn't seem to realize anything that she did was wrong at all. She had a disturbed fascination with dragons, and it was eventually discovered that she kidnapped Sirenne's siblings and transformed them into ragdoll/dragon abominations. She treated them like her children and had modified their minds in an attempt to wipe their memories. She was later killed by Sirenne.

[This is in the process of being rewritten, since the multi-soul concept was more trouble than it was really worth.]

Enide's "skin" is a soft plush fabric, stitched clumsily from darker and lighter pieces. Notably there is a large swatch of white fabric on her face, which is a distinctly different, rougher material than the rest of her body- closer to fleece. She wears a large, loose hood, with a small red butterfly clip attached to it, and a ribboned, dull red dress with a short, ruffled skirt. Her legs are coated with black and red ooze of an unknown material, which has formed into draconic claws overtop her feet. The ooze is semisolid, behaving similarly to a non-newtonian fluid when not manifesting as her claws.

Her eyes are bright red buttons and her mouth is a large slash in her fabric body, stitched over to resemble a giant smile. She has curly red-and-black hair under her hood. 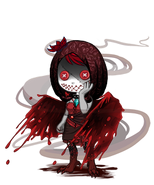 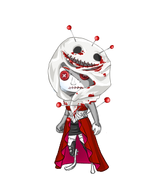 Add a photo to this gallery
Retrieved from "https://silvieskydancer.fandom.com/wiki/Enide?oldid=4171"
Community content is available under CC-BY-SA unless otherwise noted.