Start a Wiki
Ermingild is Sirenne's father, currently locked in the Garnet Maze with no hope of escape. Long ago, he was the ruler of Windsong, and he ruled to the best of his ability- while flawed, he was a fairly good king with a heightened sense of justice. The day Enide captured his oldest and youngest children was the day that he broke. Emotionally devastated and no longer fully functional, Ermingild quickly devolved into an iron-fisted, suffocating tyrant. Sirenne and Hyacinth alike both recognized that he needed to be stopped, but Hyacinth was too old to rule in his stead- so it was up to Sirenne to find a way to stop him.

He now eternally wanders the Garnet Maze after Sirenne tricked him into entering, and likely will never see the light of day again. Depressed and brokenhearted, he has given up on trying to escape, and the only reason he still wanders is that he has not lost his energy yet.

He is freed after a ghostly Sirenne apologizes to him and tells him the way to escape in the Lazuli Reborn timeline. He never does make up with Hyacinth, but he does befriend Faroku, serving as a surprisingly good grandfather figure for him. He also hits it off relatively well with Khalid.

Ermingild still wears the silver armor that he wore as king, never finding the emotional power to take it off. Beneath that is a fairly simple dark red outfit, with puffy red shorts. He has butterfly-patterned wings, white antlers, and a long white tail with a dark red tip. His hair is dark red and mostly smoothed backward, with large eyebrows, and his eyes are blue. 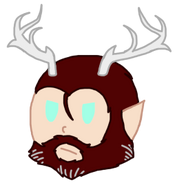 Add a photo to this gallery
Retrieved from "https://silvieskydancer.fandom.com/wiki/Ermingild?oldid=3890"
Community content is available under CC-BY-SA unless otherwise noted.