Start a Wiki
Faena is a member of the Followers of Erodon cult and the dragon to Doku. Despite being a dedicated member of the cult, she is completely harmless as a villain when not being ordered around by Doku, being fully willing to strike up a friendly conversation with the Guardians with no ill will whatsoever. However, when given an order by Doku, she will follow it to the letter, even if she has to hurt or kill her former "friends" to do it. The reason for this- she was inducted into the cult for being one of the few remaining members of her kind, the death-god-worshipping Phantites, that hadn't gone into hiding after Erodon was exiled. She only agreed to this because she had looked up to Doku for quite some time before then, which is why she unquestioningly follows the draconic mistress's orders.

Faena eventually undergoes a heel-face turn near the end of Umbra Immortalis upon realizing her role in the Followers of Erodon and how many people she had mercilessly backstabbed in her duties. She is the one to deal the killing blow to Doku, and with help from the Guardians she seals Erodon away for good. She now lives in Dragon Valley with the Guardians, and has gotten particularly attached to Corona.

Like all Phantites, Faena's body is wispy and ever so slightly translucent. She has dull purple skin, with six dark magenta tentacles sprouting from her back. She did not have these before joining the Followers of Erodon, and they're believed to be a Phantite manifestation of evil in one's soul- this is supported by the fact that they dissipate shortly after leaving the cult to join the Guardians. Faena's only clothing item is a fancy purple shirt, sometimes with light purple chains over it, sometimes not. Her hair is a bright purplish-magenta and tied into two poofy pigtails curling around her face, and she has a single dark purple horn on her forehead. Her eyes are pink with a glowing white pupil. 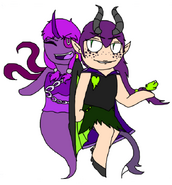 With Doku
Add a photo to this gallery
Retrieved from "https://silvieskydancer.fandom.com/wiki/Faena?oldid=4146"
Community content is available under CC-BY-SA unless otherwise noted.