Start a Wiki
Faroku Lazuli is the current king of Windsong, taking Sirenne's place after she was killed by Elidra. Having hatched a few years before the seal broke, Faroku had just gained the ability to shift into a human form when Sirenne died. The Heroes of Windsong found him wandering around in a mostly unoccupied wing of the castle afterward, having been risen there by Sirenne. They helped him get used to the rest of the castle and ruled cooperatively for a few years, until Faroku was old enough to take the helm. Faroku is much matured from his days of naivete and is a smart, effective leader, albeit very pacifistic. He has pretty bad anxiety issues following the Shadowblood's brief arrival in Windsong and Hyacinth's death, though he's still mostly functional as a person.

Faroku wears a long red coat, slightly too big for him, with golden decoration stitched along the edges. His shirt is bright orange with a golden trim along the collar. Both his pants and his coat have an orange underside, and are stitched in a rolled-up position on the sleeves and pantlegs. Faroku also wears a brown belt with a gold hexagonal buckle, and a golden headpiece with pale orangish wings attached to it. The wings are very soft. There's a small red gem on his forehead. 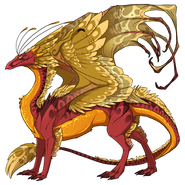 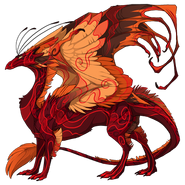 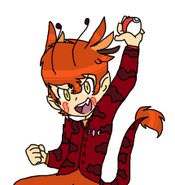 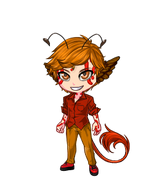 Made by DokiDokiTsuna
Add a photo to this gallery
Retrieved from "https://silvieskydancer.fandom.com/wiki/Faroku?oldid=3425"
Community content is available under CC-BY-SA unless otherwise noted.