Start a Wiki
Galego is the leader of the Twisted Vines, a gang of magically powerful criminals planning on taking over Byloth if they grow powerful enough. She looks pretty enough, if a bit monstery, when not in kill-mode, but when she targets someone as a victim, her distinct species of withered grey plantlife begins to grow around her feet and shoulders and her eyes turn solid red. She always has the sharp teeth but she only really makes them visible in kill mode. What she does is she grows withered-looking grey vines randomly around wherever the victim may be. She grows them totally randomly at first, but begins to plant them progressively closer to the victim, sort of gaslighting them in a way before she goes in for the kill. Once they realize that something is wrong, the vines begin to move, and close in on their position before entangling them. They're harmless unless Galego orders them to kill, holding a victim with enough force to prevent escape, but not enough to break bone or burst blood vessels.

Typically she drops in from the ceiling above her victim or walks in through a curtain of vines she formed on the nearest doorway, bright red eyes glowing. Depending on the victim and what she knows about them, either she'll kill them quickly- typically by ordering her vines to snap their neck- or she'll torture them with both the vines and the toxic spines in her thick, reptillian tail. Typically whether or not she chooses the torture route depends on how much of a direct threat that person is to her plans. She's savvy and knows that if someone who is a direct threat is kept alive, they may find some way to escape- so she kills them as soon as possible. Anyone who's less of a threat, she knows she can afford to play with them a bit before offing them.

Galego has a scaly body with slightly shiny, chocolate-brown scales. Her hair is black, with dark red horns curled around her head, and her ears are long and batlike. She wears a black and red vest, black and red pants, and a red omega necklace. She has clawed, reptillian feet, a thick, spiny brown tail, sharp teeth, and bright red eyes. 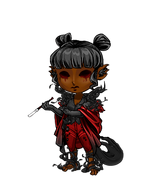 By valtiel the watcher on Recolor 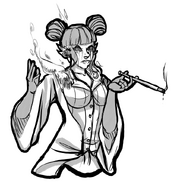 By Kitsuna Okami on Recolor 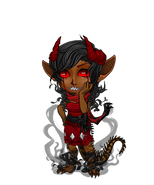 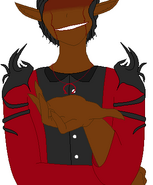 Add a photo to this gallery
Retrieved from "https://silvieskydancer.fandom.com/wiki/Galego?oldid=3584"
Community content is available under CC-BY-SA unless otherwise noted.