Start a Wiki
Gisela Maple is a young adult woman who was born in the Ghirian lowlands, but moved to Dragon Valley at age 18. She's been through a lot. No one knows exactly how, not even her, but some incident in her past burned a fair chunk of the left side of her body, and left her left leg so badly mangled that it had to be amputated. Similarly to Elva-Russa she can't wear prosthetics- they trigger an odd burning sensation and phantom pain in her leg, presumably connected to the fire that caused her injuries- so she uses crutches instead.

It's believed that whatever the source of the fire was, it was magically charged with high amounts of the Drakhallian Fire aspect, since the effects never seem to go away. Sure, they've lessened a bit over the years, but the burn won't ever fully heal. She also carries an odd sense of heat along with her- people in the same room as her will often start feeling like they're overheating after too long. Some people even claim to see smoke trailing behind her as she walks. She periodically gets checked up on by Daimhin, both to help lessen her pain and to study her burns and maybe, someday, piece together an image of their origin.

Gisela wears a yellow and white shirt with a yellow tree branch on it, and a dark brown skirt. Her hair is black and tied into a short ponytail, and she wears a yellow headband. Most notable is that the left half of her face and her torso and left arm from collarbone to elbow are scarred with reddish, unhealing second degree burns. The stump that remains of her leg is also heavily burned, with fairly clean healing over where the amputation was made. She wears an eyepatch over her left eye, and has to use crutches to get around.

Wit a prosthetic leg by Almei 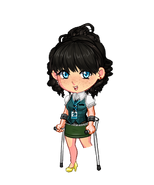 Add a photo to this gallery
Retrieved from "https://silvieskydancer.fandom.com/wiki/Gisela?oldid=4071"
Community content is available under CC-BY-SA unless otherwise noted.