Start a Wiki
The Alpha Harmonios, known in this cycle as Harmony, is a cornerstone of the Harmonia universe and the adult form of the Librix. She creates the pure magic that forms the backbone of the universe. The Diamas Harmonia was effectively a chrysalis for her, and before she emerged, she created the universe's framework from this crystalline pupa in a semi-sapient state. She forms normally in a few timelines, but is forced out by the Shadowblood's antics in others. Sweet and energetic, but somewhat childishly naive at times, Harmony is also a steadfast protector of the Harmonia Temple and everyone within it.

While technically higher on the pecking order than Nithya, she is no longer goddess of creation, since she was torn apart by the Diamas Harmonia's destruction and Nithya took her place. Instead, she uses her Eyes of God, a power shared with Nithya, to search the universe for the pieces of her shattered jewel body, and identify who is connected to each shard, as well as locating new Balancers and helping them to ascend to full Balancer status. While Nithya leads the gods, creates new things, and protects the universe from harm to the best of her ability, Harmony simply keeps the place tidy, cares for the other gods, and makes sure everything is functioning as it should.

Harmony wears a fancy green-and-pink shirt over a blue-and-purple two-toned skirt, as well as pink leggings with purple star marks on the knees, and a starry purple cape. She has interesting ringed wings; the larger dominant pair is pink, while the smaller pair is blue. These are very small and aren't actually useful for flight, but in a similar fashion to Spectrima, they serve as amplifiers for her magic abilities (and look pretty to boot). Her hair is in a slightly messy ponytail, and is light blonde with pink tips. 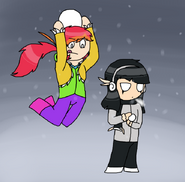 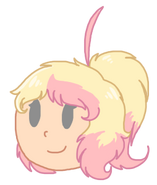 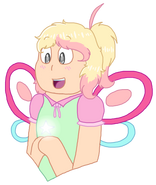 Add a photo to this gallery
Retrieved from "https://silvieskydancer.fandom.com/wiki/Harmony?oldid=3888"
Community content is available under CC-BY-SA unless otherwise noted.