Start a Wiki
Imogen Lechka is a minor villain to the Heroes of Windsong, specifically Orianne. Before Orianne ended up in Windsong, she and Imogen were longtime rivals- seeing who could create the more extravagant craft. Imogen was particularly good with machinery, whereas Orianne's specialty was always kites. When Orianne left and Imogen was left without her friend and rival, she spent quite a long time searching for a way to get to Windsong and get back in touch with Orianne- mostly failing for quite some time. But just as she was about to give up, she found an Angel Aura crystal at her doorstep...this now serves as a core for a multi-functional pack she wears on her back, which includes functional wings. Unfortunately, using Pure Aura as a power core wasn't the best idea in the long run, and the machinery eventually fused to Imogen's back, infusing her with Pure Aura energy as well- which, slowly but surely, ruined her mental state. Now, having arrived in Windsong, she wishes to find Orianne and finally prove that she is superior...no matter what may happen to Orianne in the process.

Imogen wears a ruffled black and purple dress with a purple jacket over it, held closed in the center by a gold-rimmed clock. She also wears a purple neck bow, a belt with chains and a pocket watch hanging off it, and a black top hat with a gold ribbon and purple feathers sticking out. There is a brown eyepatch over her left eye; this is meant to hide that quite a bit of Pure Aura has pooled in that eye and is highly visible from the outside. 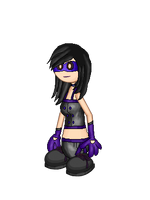 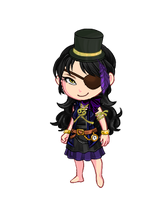 Made in recolor.me
Add a photo to this gallery
Retrieved from "https://silvieskydancer.fandom.com/wiki/Imogen?oldid=2513"
Community content is available under CC-BY-SA unless otherwise noted.