Start a Wiki
Jotun is a Cumulan woman born in Kingfisher Palace, and is the current guardian of Jasper and Reese. She was the one who spotted them drifting alone at sea after their home was destroyed in the big melt, and she rescued them and brought them to Kingfisher Palace. She protects them with all her heart and will do whatever is needed to make them both happy, but even she isn't infallible- she has slight favoritism towards Jasper. She's a motherly and calm woman with a very long temper and a great sense of humor, but can be a little too protective at times. Both the Avery boys agree that she has a fantastic singing voice, though she wouldn't be caught dead knowingly singing in front of people.

In spite of her gentle nature, she was raised as a powerful guard for Kingfisher Palace, and while she has since retired from her job, she is still an exceptionally skilled swordfighter and is a guard teacher these days. Her most dedicated student is Raelyn, unsurprisingly.

Jotun's skin is shiny and a light jade tone, and her hair is long, fluffy and dark green. She wears a dress with a dark teal ribboned corset and long, sky blue skirt, as well as a translucent blue cape, dark blue boots, and a winged headpiece made of lightened bluesteel. Like most Cumulans, she has large wings of light that she can manifest at will- hers are jade green. Her eyes are light blue. 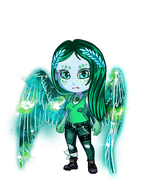 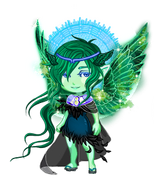 Second concept
Add a photo to this gallery
Retrieved from "https://silvieskydancer.fandom.com/wiki/Jotun?oldid=3562"
Community content is available under CC-BY-SA unless otherwise noted.