Lamya is a thaumaturgist from the Bladewood Grove, driven insane by Warp long ago. She formerly lived in the Black Forest, but after hooking up with Nala, she has since moved to the Grove. When not vividly hallucinating and panicking over it, she is a very anxious person and often rambles about things that seem to make perfect sense to her, but range from mildly confusing to absolutely bizarre to everyone else. She usually starts to make more sense if she avoids practicing magic for a while.

Lamya was driven mad by Warp when she studied resurrection in an attempt to bring back a fellow mage who she deeply loved. She never got far enough in thaumaturgy to learn how to "properly" resurrect a human, and thus she instead attempted to use her own blood (and then some) in a cruder ritual not listed in her Thaumonomicon. She mutilated herself in the process, even losing an eye. She would never have done this before then, but by then she was too far gone to realize what was wrong. Naturally, this did not go well and her love came back VERY wrong, their mangled new body resembling a sick parody of a human being. The sight of what she had created drove her mind ever deeper into the abyss, and she decided it'd be best to kill them- which threw her right off the deep end.  This was the point in her life where her Warp hallucinations were the worst, being constant, unrelenting barrages of horror. Quite a few of them included a violent, dark caricature of her love. This went on for so long that she eventually attempted suicide by overdose. She was then hospitalized in Windsong, where Cobra caught wind of what had happened- they were decent friends- and started visiting her frequently. The doctors did manage to save her, and her Warp stabilized shortly afterward.

In order to "stabilize", the Warp had to take a physical form, removing itself from her mind. It centered itself in her heart and her arms, giving her a weak heart and twisted, gnarled black flesh on her forearms, tapering into claws at her fingertips. It's flecked with purple spots resembling little eyes, though they're little more than shallow craters in the flesh. (If her chest were cut open, you'd be able to see that her heart is now composed of the same stuff, though it's much more flexible there.) This stabilization is also what formed Psyche and gave her her magic eye, looking like a bright purple glowing orb in an otherwise-black eye socket.

In the Golden Timeline she wears a feathery, hoodless rose-pink cape instead, over fancier-than-usual white clothing. The black tips on her hair are gone. From her shoulders and wrists, pink crystals grow, pulsing with the energy of Creation- good thing she hasn't learned how to use that yet. She usually is smirking smugly or looking frustrated. 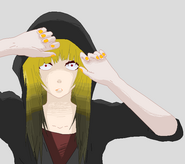 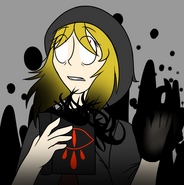 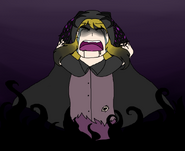 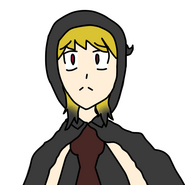 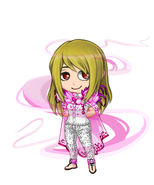 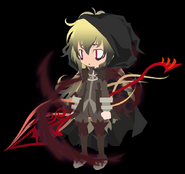 A very loose "original" concept for Lamya, made in Dreamselfy. This was the first image of Lamya made, to get a handle on what her design would be. (Very little of this is currently canon.)

With Nala and Psyche 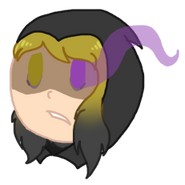 Alt outfit
Add a photo to this gallery
Retrieved from "https://silvieskydancer.fandom.com/wiki/Lamya?oldid=4197"
Community content is available under CC-BY-SA unless otherwise noted.