The Librix is an enigmatic being created when the Diamas Harmonia began its creation phase. Since it was killed in his effort to kill the universe, it has come back in several different forms and indirectly brought numerous new people into the world.

Its newest life calls herself Victa Odd, and is fully aware of her regenerating status, and gains her life title, the Gambler, from her reckless gambling and willingness to throw her life away just to see what'll happen afterward and know who she'll become once she reincarnates. She is masochistic and greatly enjoys pain.

Its most well-known life, Simon, shared the same personality as his original blob form- horrifically evil and sadistic, wishing to watch the universe crumble. Fortunately, his plan failed. That life was killed by Nithya in a final battle at the Harmonia Temple, with some intervention from Elidra.

The Librix's appearance changes depending on its life. Simon wore a long black-and-purple jacket over a torn-up shirt bearing the Angelic symbol of chaos, and slightly tattered pants. Victa's outfit has a distinct magician aesthetic, complete with top hat. All lives seem to share a specific form of distortion; from their back, two to six shadowy tentacles sprout- these serve a different purpose depending on life; Simon used them as weapons, and Victa uses them to subtly cheat when playing card games and to pose, often forming them in a heart in front of her. They also have a striped dark grey-and-black tail. Their skin is dark and greyish, and their eyes are different depending on life, but always have black sclera. Simon's eyes dripped shadow fluid and had white pinprick pupils, while Victa's eyes have a purple heart shape in place of an iris and pupil.

When the Librix first formed, it was a formless black blob, with purple sparks and flashes coursing through its amorphous body. For milennia it lay dormant, observing the universe and all its patterns, before sneaking through the patterns to destroy the Diamas Harmonia- knowing it was the lifeblood of all the first gods. It wanted to see the universe die.

Ever since then, it has reformed in numerous different forms, with varying personalities. Only one of these reformations, Simon, has come back with the same sadistic, destructive desires he had those millions of years ago. After doing much destroying, harassing Elidra, and killing Khalid, he was hunted down and sealed away by Elidra and Jada. Life 12 formed a while afterward with a newfound self-awareness observed in no life prior. She called herself Victa Odd and began gambling for the fun of it. In the back of her mind, thoughts always float about what'll happen to her when she finally dies- and eventually, die she did. The new life formed shortly afterward, beginning the Librix's Order Phase, and called themself (???).

Each of his lives has reincarnated as a new person after they were defeated. Most of these new people have not been identified, but the ones from Life 11 and beyond have- Simon and Victa. 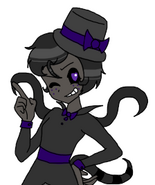 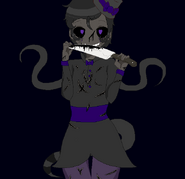 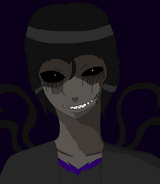 Being threatened by Ceri. Not that he cares, anyhow. 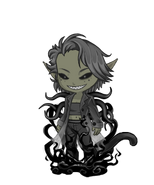 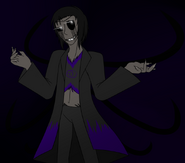 Just realized I never uploaded this. GG me. 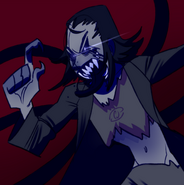 "Natural" Simon- how he should have formed, had he not been corrupted by unnatural dark magic in the process.

Add a photo to this gallery
Retrieved from "https://silvieskydancer.fandom.com/wiki/Librix?oldid=4006"
Community content is available under CC-BY-SA unless otherwise noted.