Start a Wiki
Maura Carmina is the lead singer of the Brasspunks, an electroswing band from Starlight City. While friendly, she is somewhat vain and has let her band's popularity go to her head, being a little selfish and caring more about getting to top levels on the charts than much else.

With her older, harder to draw hair style. 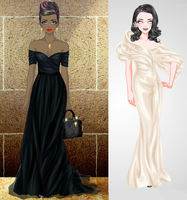 Gala outfit... A fun by Almei

Add a photo to this gallery
Retrieved from "https://silvieskydancer.fandom.com/wiki/Maura?oldid=3952"
Community content is available under CC-BY-SA unless otherwise noted.