[to be rewritten in Byloth Tides]

Narissa has silvery-gray skin with small scales across her body, and large red fins on her head, along with frills on her back and tail, and webbed fingers. She wears a transparent, very loose dresslike skirt over a very small top with tendrils coming off the bottom. Her tail is thin and very movable, and her translucent frill reaches to the tip of it. Her hair is bright red and very fluffy. 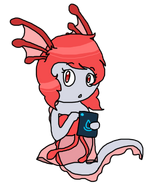 Add a photo to this gallery
Retrieved from "https://silvieskydancer.fandom.com/wiki/Narissa?oldid=4079"
Community content is available under CC-BY-SA unless otherwise noted.