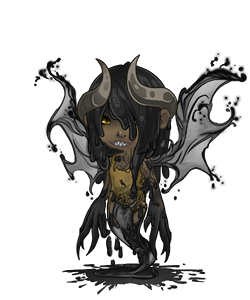 Nimhe is a toxic entity born from a meteor that crashed on a far-off planet somewhere in the Neo Interstellite universe. The meteor carried a bright green substance which, alongside poisoning the life in the area, affected a species of bacterium found only on that planet and caused it to form into Nimhe. Alongside his real name, he's known as the Plaguecaller in a lot of alien cultures, and is blamed for pandemics across the galaxy- which he usually didn't actually have a part in. Usually. His effects on the galaxy are mostly indirect; his mere presence can spawn a bacterial infection of any kind on a planet. Sometimes it's easy to contain, sometimes it's not. The worst of his diseases can survive in a vacuum, allowing his influence to spread even to planets he hasn't so much as touched.

He isn't necessarily evil, even though he definitely looks the part; he doesn't really know what he's doing at any given moment, considering he's a bacterial colony taking a humanoid form. He occasionally has sparks of human intelligence and is completely confused and a little scared when he does, but they don't usually last for more than a few seconds or so. Hecan, however, be affected by the same meteor that created him, and this shifts him into a higher level of intelligence for as long as he's within the meteor's effective range. This colors the veins on his body bright green, as well as his eyes, and generally greenshifts his palette. Now, normally this wouldn't change much- he'd just be poisonous bacteria with a level of intelligence they do not normally have, that's all; just scared and confused like usual. However, the meteor- or rather, the substance within the meteor- has a mind of its own, and uses Nimhe's body as a vessel whenever he happens to be around. This is when he's really evil. Should his body gain enough cohesion to be able to carry the meteor around, the entire universe may be at risk.

I don't feel like formatting this page properly right now, so will finish later. 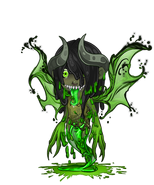 When possessed by the Meteor. 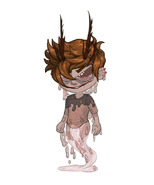 Made by Almei
Add a photo to this gallery
Retrieved from "https://silvieskydancer.fandom.com/wiki/Nimhe?oldid=4128"
Community content is available under CC-BY-SA unless otherwise noted.