Start a Wiki
Nitra is a lookout for the city of Psan-azu, located in the Mirror Sands. She watches for Sand Serpents and bandits alike, and will alert the city to an incoming threat by ringing a bell in her lookout tower. On the job, she tends to get rather hyperfocused and unresponsive to others, and is usually the quickest to respond to an oncoming threat thanks to her sharp focus. Her protective nature often leads to her using her purple magic to snipe from her tower, as well, so that she can keep their numbers down, for the ease of the guards.

Off duty, she's much warmer and more friendly, albeit very sarcastic and usually trying to find anything she can to snark about in the current conversation. She's decent friends with Rocco, who helps to keep the sand serpents at bay whenever he happens to drift by the city.

will fill in later 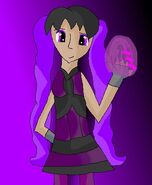 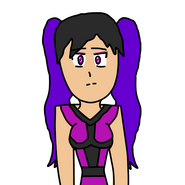 Add a photo to this gallery
Retrieved from "https://silvieskydancer.fandom.com/wiki/Nitra?oldid=3171"
Community content is available under CC-BY-SA unless otherwise noted.