Start a Wiki
[Getting a rewrite.]

For the most part, Roshan's appearance is entirely unremarkable, other than her alicorn parts, which consist of a pink tail, white feathered wings, white droopy ears and a long cream horn. She wears a white hoodie with a blue heart on the front and blue jeans, and keeps her short pink hair in two puffy pigtails. 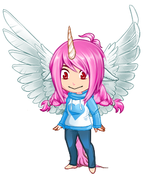 Made in recolor.me
Add a photo to this gallery
Retrieved from "https://silvieskydancer.fandom.com/wiki/Roshan?oldid=3642"
Community content is available under CC-BY-SA unless otherwise noted.