Start a Wiki
San is a Najalos living in Byloth. He is one of only a few of his race left after the big melt. He's never met another Najalos in his life and was raised by an Aquel family. He knew he was adopted, since he obviously wasn't an Aquel, but he always had a strange sense of identity loss. He's spent most of his life trying to figure out what exactly he is and why he's never seen anyone who looks like him.

When he isn't lost in his tireless quest to identify himself, he's a rather brash, energetic jokester who's usually found chatting or playing games at Veldor's coffee shop. He's such a frequent customer that most of the other regulars know him well, especially for his habit of showing off his Najalos fire-breathing.

San has black skin with red spots across his body, and he has four arms, droopy ears, short horns, and a long tail decorated with metal jewelry. His eyes are solid red with small black pupils, he has a dark red orb on his forehead, and he has sharp fangs. These are all typical Najalos traits. He has dark, dull red hair shaved on either side, with dark red tattoos on his scalp. He wears a black shirt with a dark red jacket over it, dark red pants with black boots, and a black-and-red studded belt. 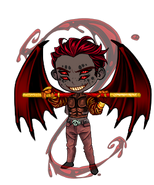 First concept (that I bothered to save)
Add a photo to this gallery
Retrieved from "https://silvieskydancer.fandom.com/wiki/San?oldid=3567"
Community content is available under CC-BY-SA unless otherwise noted.