Simon Penumbra is a Lower Earth man who carries the sadism of the Shadowblood's eleventh life. He has no sense of empathy, a manipulative streak like no other, and no remorse for any of the cruel, bloody things he does. He tries his hardest to "make friends" with people so they'll come over to visit his home, before he brutally kills them by way of knife. Unlike all previous lives of the Shadowblood, he's aware of his origin and when he's not luring people into his death trap, he's feverishly researching the Shadowblood to know as much about what he used to be as possible. For...curiosity reasons, of course. Obviously not to find out how he could get that level of power. Clearly not.

Simon's appearance is effectively that of the Shadowblood, but more colorful and less distorted. He lacks the tentacles and tail, has a blue and green color scheme instead of black and purple, his shirt is longer, and the shadowy veins on the side of his face are replicated in the form of a burn. 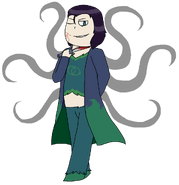 Add a photo to this gallery
Template:DarkNav
Retrieved from "https://silvieskydancer.fandom.com/wiki/Simon?oldid=3103"
Community content is available under CC-BY-SA unless otherwise noted.