Start a Wiki
Skarrel is the current goddess of darkness in Harmonia, coming into existence to replace Rastus after he was cursed. She does not open up easily to people, and is extremely sharp-tongued and quick-witted- two traits that do not go well together. She has a bad tendency to mock or insult the other gods, and while she is not considered corrupt, this has gotten her in trouble with Nithya more than a few times. However, as some of the gods- like Elidra - know very well, once she trusts you, her rude, venomous exterior completely melts away, leaving a much friendlier- but still very, very snarky- woman where it once stood.

When Khalid died and Elidra failed to hit it off with Ayako, Skarrel began to grow closer to her as she tried to search for companionship in his stead. The two eventually grew quite close to each other and eventually hooked up, remaining together for a few years until Elidra was killed by Galahad. Skarrel, not knowing how to handle grief, simply dissociated and shut herself out from the world for a few days, becoming much quieter and spacier than usual. The other gods immediately noticed that something was wrong when the air wasn't filled with her sarcastic quips, and Rastus was the first to approach her. She immediately clung on to him, sensing a connection in his similar dark energy, and the two have now hooked up themselves.

Skarrel wears a fuzzy-collared, detailed black top and a ragged, slightly translucent black skirt over black leggings, and has black ribbons on her arms. Her hair is black and parts in the middle, and is always done up into a very long braid. Her eyes have a white "X" in the middle in lieu of a pupil, making them resemble buttons, and she has pointed, drooping ears and an extra pair of arms. 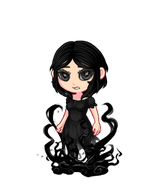 Why the hell did I never upload this. With Khalid and Elidra.
Add a photo to this gallery
Retrieved from "https://silvieskydancer.fandom.com/wiki/Skarrel?oldid=3333"
Community content is available under CC-BY-SA unless otherwise noted.