Start a Wiki
Valor is a valkyrie and acolyte of Nithya- in fact, he is the only valkyrie still in existence. In the era of the First Gods, valkyries were very common and served to protect the gods from any evil that may exist in the universe. Valor was unique in that he felt deeply for the gods, and Nithya in particular- rather than seeing this as simply a job to be done, he saw his work as a valiant thing; a quest to protect the most wonderful people he had ever known. However, when the Diamas Harmonia was destroyed, almost all of the valkyries died with it- except Valor. A determined man with his heart closer to his master than all the others, Valor chose to stay with Nithya as the gods' energy faded and his colleagues dropped dead around him. Due to this, he managed to cling to life, with the energy of the Harmonia White Opal spilling over to him as Nithya was revived.

Nowadays, he serves as a guard of the Temple, valiantly protecting the structure and everyone in it with his life. He can be a bit unfriendly to those he doesn't know, and is a bit trapped in the past- especially with his speech pattern- but as long as they do not threaten the gods, he is accepting of- or at least tolerant of- those who visit. He is closest to Nithya, and would sacrifice everything to make sure she survives- even if the cost is his own life.

Valor wears dark, dull brown garments under white, gold and silver armor and a brown cape. His silver, winged helmet is streaked with bronze, with sharp wings made of quartz. His hair is long, braided in the front, and light blonde, and he has a large nose and red streaks on his cheeks. As a signal of his ascended valkyrie status, faint yellow light wings manifest behind him at all times- however, unlike Nithya's hard-light wings, these feathery seraphim wings are a mere illusion and do not actually exist. They glow faintly, producing a faint yellow aura of light behind him. 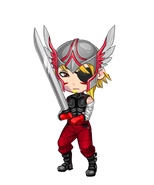 Add a photo to this gallery
Retrieved from "https://silvieskydancer.fandom.com/wiki/Valor?oldid=3145"
Community content is available under CC-BY-SA unless otherwise noted.