Start a Wiki
Veldor is an Aquel barista working in a small, local coffee shop in Byloth. He's generally a very amiable, mellow person who would rather just relax with his tea and whatever novel he's currently reading than do anything else. It's not uncommon to see him striking up conversation with customers when he's on break; that, or sitting alone at a table with his nose in a book.

Despite his easygoing nature, he's almost frighteningly competent when forced to fight, moving swiftly and fluidly to take down whoever may have prompted him to fight. Since he's rarely upset enough to try to fight he's not often seen in this state- which makes it even more surprising when he switches into brawl-mode.

Being an Aquel, he is able to breathe underwater, which comes very much in handy for protecting the coffee shop when some sort of aquatic life gets a bit too close for comfort.

Veldor's skin is smooth and always slightly damp, similar to a dolphin's skin, and is dark teal with a distinct blue mark over his nose. His ears are pointed and droopy. His hair is dark blue and very long, though he dyed his bangs jade. He wears a blue-and-white vest-shirt and black-and-blue pants, with teal shoes, and he has large, clear fins sprouting from his back, patterned with bioluminescent green patches. These patches are not always visible and flare up in certain situations. His blood is typical Aquel cyan. 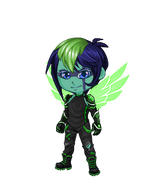 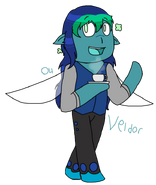 Collab Art made by Silvie, Almei, Lpcarver and Rasd
Add a photo to this gallery
Retrieved from "https://silvieskydancer.fandom.com/wiki/Veldor?oldid=3961"
Community content is available under CC-BY-SA unless otherwise noted.