Start a Wiki
X is a Draconine, native to Dragon Valley, and is one of the four Guardians of the Valley. Being native to Dragon Valley, he has always been in touch with the Drakhallian Aspects, knowing very much about them- but particularly his own, Fire and Magic. He is a veritable glass cannon, being very strong and rather quick, but not particularly tough on defense. He's also very bad at puzzles.

When the world was threatened by the former god Erodon, X was the most reluctant to join the group, believing that his kind was more important than his new friends- not out of intentional prejudice, but simply because he was raised that way. It was Corona who convinced him to break the mold and become a Guardian. He still lives in Dragon Valley to this day.

X has a lithe, snakelike body coated in sleek purple feathers. Some parts of his body have slightly iridescent dark blue feathers, including a feather crest on the top of his head. His clawed, birdlike hands and feet are exposed, with no feathers on them, and they are a lighter purple than the rest of his body. He also has sharp, angular dark blue-gray horns and bright green eyes.

He was born with a strange black mark beneath his eye; no Draconine is sure where exactly this came from or what it means. 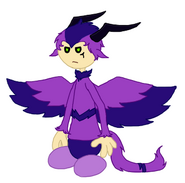 A timeline of the various designs X has gone through over the years.

vent art
Add a photo to this gallery
Retrieved from "https://silvieskydancer.fandom.com/wiki/X?oldid=4078"
Community content is available under CC-BY-SA unless otherwise noted.