Start a Wiki
Zaedhuth is a Zaknon, living in Windsong as a helpful pet of the Heroes. He was among the first Zaknon to arrive on Windian Earth, and he initially landed near Mythos Labs. Using this as an opportunity to check the planet for corruption, he turned the condemned building into an endless maze, using his species's spirit sense to check all who stumbled into the maze's Balancer alignment. Like all members of his species he is distrustful of chaotically-aligned beings, but is friendly around neutrally- and orderly-aligned ones. He himself is neutral.

Zaedhuth shows typical male Zaknon anatomy- a seven-foot-tall beast with thin legs that taper to a single needle-like claw, large wings with scythe-like claws on the end, a beaked mouth, two tails and three eyes. He is pink, with barred markings like Faroku, and a few blue accents here and there. 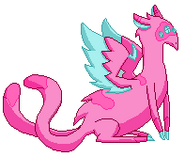 Zaedhuth pixel with the old head

The first image of Zaedhuth that was drawn. His design has been greatly simplified since this was made. 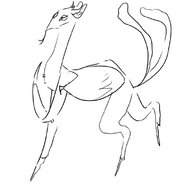 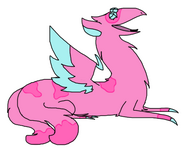 Add a photo to this gallery
Retrieved from "https://silvieskydancer.fandom.com/wiki/Zaedhuth?oldid=3495"
Community content is available under CC-BY-SA unless otherwise noted.