Zhiara is a spirit of order, a foil to Thana, and a former resident of Akira's body before manifesting her own. As of now she may manifest as either a beautiful woman or a pure white Skydancer; whichever form she would prefer to take on at any given time. She is calm, motherly, and gentle; kind of an embodiment of good, if you will. While she has her own body and such, unlike Thana she has chosen to live alongside Akira and provide assistance to her when she needs it. However, she can be a touch overbearing, and is usually told off when she is; she apologizes promptly when this happens.

When part of Akira, the changes she would make to Akira's outfit were simple- she altered it to be somewhat kimono-esque, with a white-and-gold color scheme that carried to the rest of her. Her wings would also gain armor atop them.

Her standalone form's outfit consists of a white-and-gold layered dress, with a heart symbol in the center of her chest composed of swirls- similar yet different to Akira. She also wears a tiara, with a green gem in the center. Her wings are white and much larger than Akira's, and her hair is blonde and slightly curly. Her eyes are green and very soft. 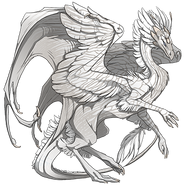 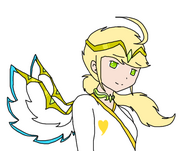 The biggest Team Mom this side of Katara in action.

Add a photo to this gallery
Retrieved from "https://silvieskydancer.fandom.com/wiki/Zhiara?oldid=3497"
Community content is available under CC-BY-SA unless otherwise noted.